Thompson Beach is the northern gateway of Adelaide International Bird Sanctuary, which is now incorporated in a National Park that goes by the indigenous name of Winaityinaityi Pangkara*.

The Sanctuary/Park have been created to preserve a safe haven for shorebirds that migrate each year between Australia and the northern hemisphere; as well as protecting native resident species.

Some of the many migratory bird species include:

More than 50 species of migratory birds have been recorded in the Sanctuary/Park, in addition to ninety species of inland birds, plus other wildlife. 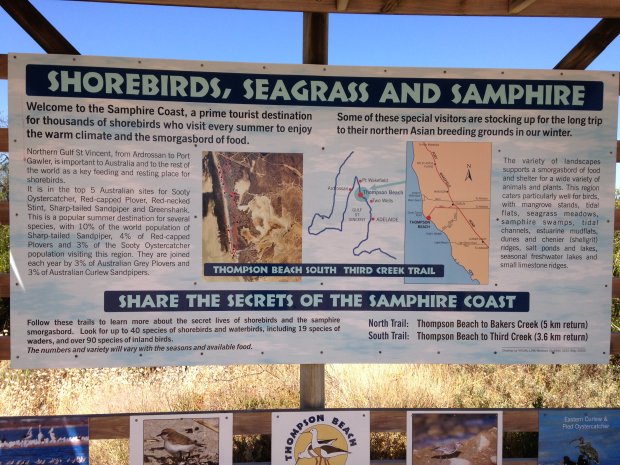 The Samphire Coast Shorebird Trails at Thompson Beach provide walks demonstrating the conservation significance of the area. The Northern walk goes all the way to Bakers Creek (near Webb Beach) and the Southern Walk extends though to Third Creek.

The North Trail is a 5km return walk and the South Trail, 3.6km – so it’s an easy walk for most folks and without any big hills to contend with.

A detailed, free colour brochure prepared by Anne Jensen of Wetland Care Australia detailing the highlights of the Shorebird Trails is sometimes available from the information board at the southern end of the  Thompson Beach.

In total, the Bird Sanctuary encompasses over 60 km of coastline; running from St Kilda in the south to Port Parham in the north.

In addition to a Collective Plan, a draft management plan was developed to set directions for the management of the Adelaide International Bird Sanctuary National Park. Submissions regarding the draft plan closed in April 2018.

Once the Parks and Wilderness Council has considered feedback and advised on issues raised during the consultation period, it will be submitted along with the plan to the Minister for Sustainability, Environment and Conservation for consideration and adoption.

As well as protecting birds, the sanctuary will also improve the quality of the water entering the Gulf of St. Vincent, help protect the coastline from climate change impacts and create opportunities relating to local and international tourism.

You can learn more about the Adelaide International Bird Sanctuary/National Park here. 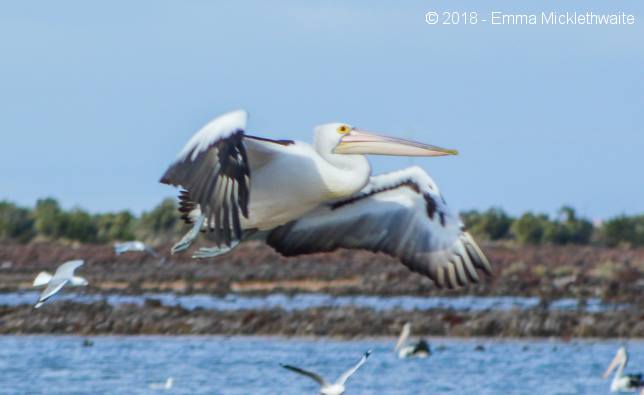 In addition to birds, the Thompson Beach area is also home to various other wildlife; such as kangaroos, wallabies, echidnas and a range of reptiles. There are some brown snakes in the area; so take special care during summer.

When visiting the area, please take some simple steps to help protect Thompson Beach for wildlife and current and future generations of visitors and note that the speed limit all throughout the township is 40km/hr.

Beach driving and vehicle use is not permitted in the Park area north of the now-closed beach ramp at the northern end of The Esplanade.

Additionally, a beach driving ban (excluding boat launch and retrieval) is in place from October 5, 2020 to May 31, 2021 for the beach in front of the township.