Local residents along with various government, community and other non-profit groups, have put significant time and toil into conservation efforts at Thompson Beach – so that they and others can enjoy it for years to come.

Please respect the area and the efforts of those who help keep Thompson Beach the way it is.

When visiting, bear the following in mind:

As well as not leaving rubbish behind, if you spot garbage on your walk along Thompson Beach, you can help conservation efforts by picking it up – it doesn’t take much effort to do so.

While picking up a plastic bag mightn’t seem like a huge help,  with the CSIRO forecasting almost all seabirds will have plastic in their digestive tracts by 2050; it is a big deal.

Birds often mistake plastics as food, or ingest plastic by accident. It can cause digestive tract blockages and starvation, leading to death.

Besides that, garbage on a beach just looks awful.

*A Note About Driving On Thompson Beach

With regard to beach driving – just because you can do something, it doesn’t mean you necessarily should. Most people probably shouldn’t unless they have sand driving skills, even if you have a 4WD.

Get out, stretch your legs – the walk will do you good :).

Beach driving is really only suited to 4 wheel drives – some of the locals I’ve spoken to are a little tired of pulling vehicles out from the beach when they get bogged. Unfortunately, bogging at Thompson Beach is a fairly regular occurrence. It’s gotten to the point some locals refuse to assist in retrieving vehicles – and who can blame them, as it’s a time-consuming and risky exercise.

If you get bogged, it could be a very expensive trip – costing up to $1,000 for a professional tow service to retrieve you.

Its not just 2WD’s that can get bogged in sand. Plenty of 4×4 vehicles have become stuck at Thompson Beach. A 4WD is not a Sherman tank – it has limitations, as do drivers.

You don’t want your vehicle winding up like this! 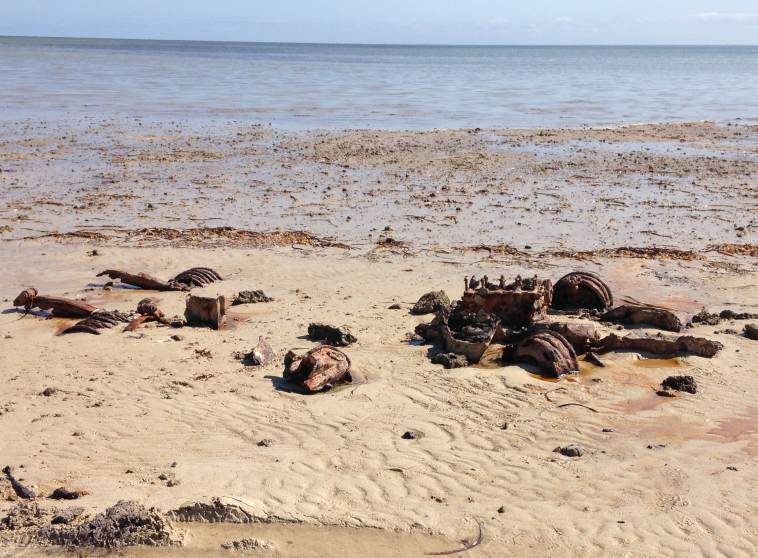 If you do decide to drive – choose your line carefully and don’t venture too far out if it’s low tide. Aside from increasing the risk of bogging, the tide comes in pretty quickly at times. Ensure you’re carrying the necessary equipment to get yourself out of a bogging situation should it occur, rather than relying on someone else assisting you.

If there is a buildup of dead sea-grass on beach access points, then attempting to drive on the beach comes with the added danger of igniting the material.

Avoid attempting to cross the inlet mouth at the north of Thompson Beach as this is where many vehicles get stuck, which can be particularly problematic if the tide is on its way in.

Bear in mind the northern end of Thompson Beach is a designated bird sanctuary, not a recreational 4WD area.