While the shorebirds tend to steal the limelight at Thompson Beach, the Bird Sanctuary/National Park is home to many other species of wildlife – which often also find their way into the backyards of locals.

Here’s some of the various creatures you may come across. 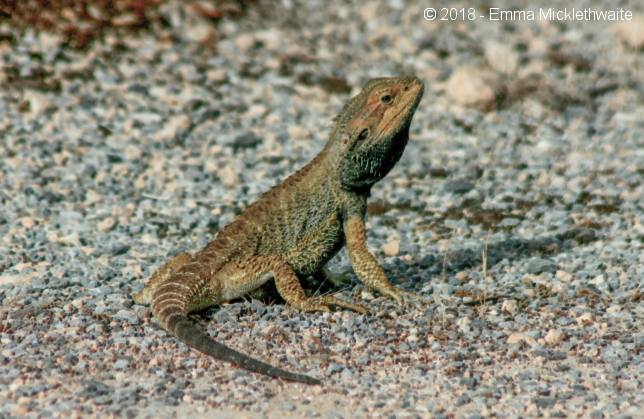 The bearded dragon is named such as when it feels threatened, it puffs out the skin around its neck that is covered in spiked scales. They can look ferocious, but aren’t aggressive. The bearded dragon can change its skin colour to help better blend in with the background. They also have a bad habit of sitting on the roads, so drive with care. 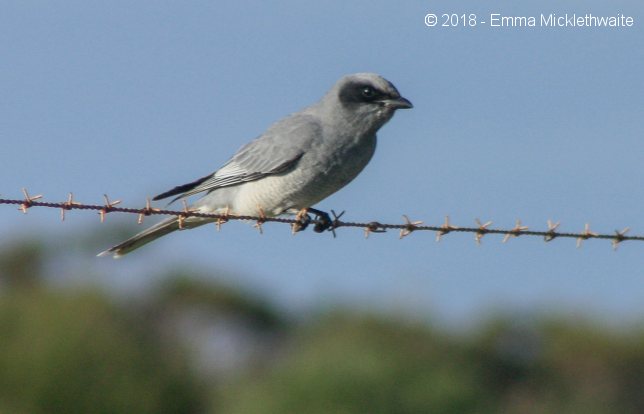 Pictured above is a juvenile black-face cuckoo shrike. This species feed on insects and other invertebrates, but it also known to eat seeds and fruits. 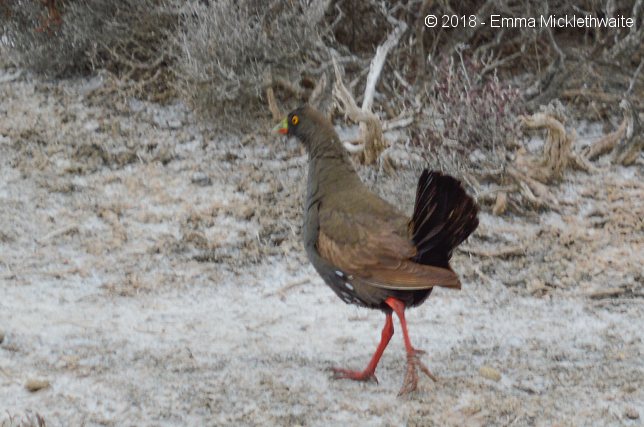 The black-tailed native hen lives near fresh or brackish water. They’ll often be seen in small groups pecking around (hence the name) for insects and seeds. It’s not uncommon to see these birds on the roads of Thompson Beach, so please drive carefully. 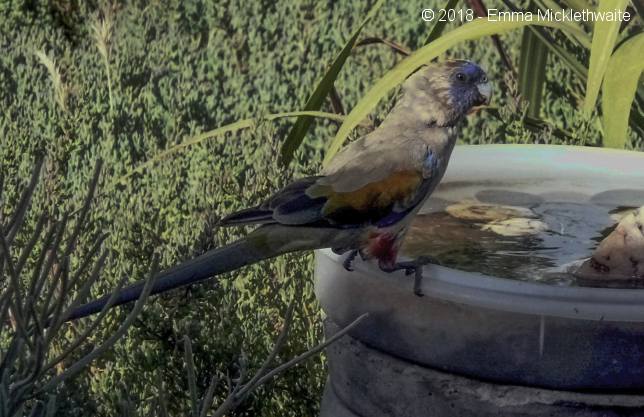 Once a common sight around Thompson Beach, the Blue Bonnet Parrot hasn’t been sighted for a while unfortunately. 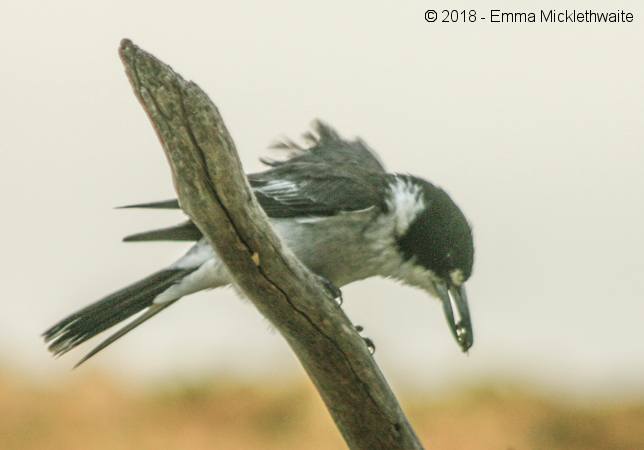 Butcherbirds get their name for their habit of impaling their prey on the spikes of branches, for consuming later or to attract mates. 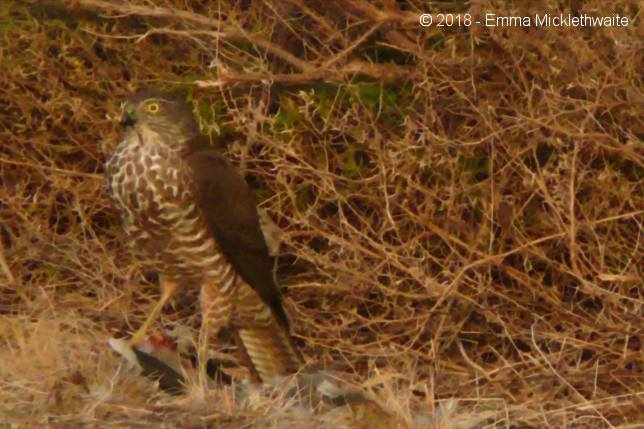 This very intense-looking bird is a Collared Sparrowhawk. As the name suggests, the Sparrowhawk’s favourite prey are small birds – and you can see in the photo this one has bagged a meal. 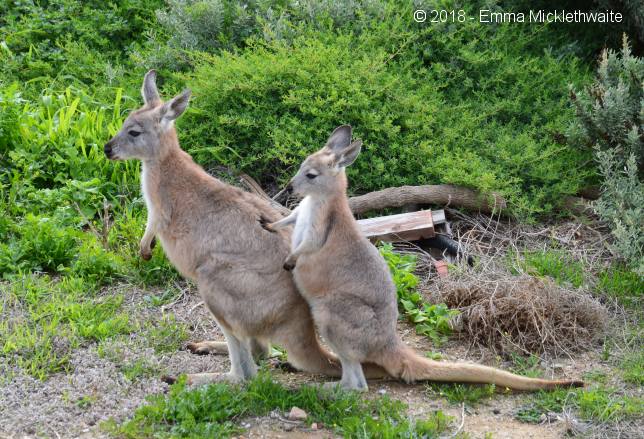 How cute is this pair! Euros are a common sight around Thompson Beach, often entering the yards of residents. Unfortunately, they have little in the way of road sense, so watch out for them around town and the road leading into it. 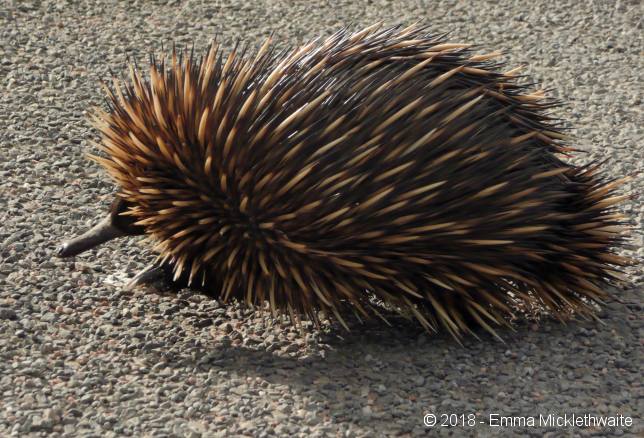 The echidna is one of only two monotremes in the world (egg-laying mammals). The other is the platypus. If you get to see an echidna, consider yourself lucky – they are very shy and masters of camouflage, but it’s nice to know they are around. They are usually spotted out and about just after rain. 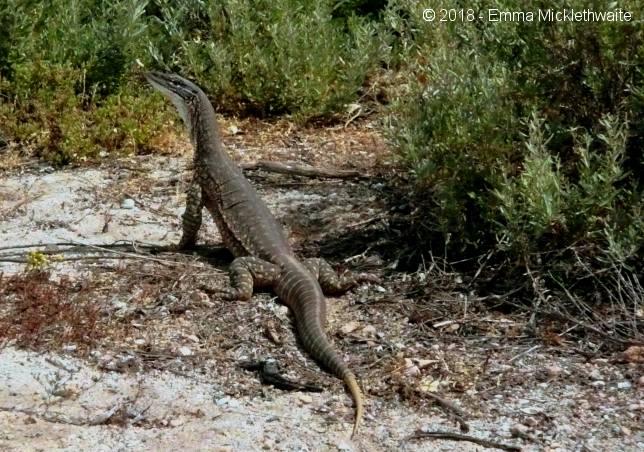 Goannas can be seen quite often in the summer months and again take care as they have a bad habit of sunbaking on the roads. While generally not aggressive, don’t get too close to them. They have sharp claws and as their diets consist of carrion, a scratch can end in a nasty infection. 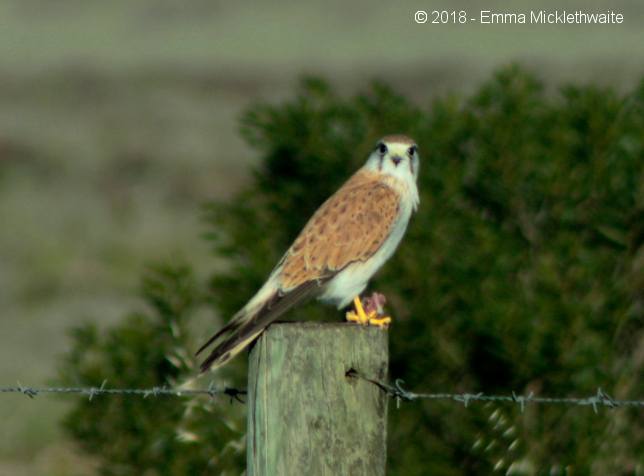 The beautiful markings of the Nankeen Kestrel arguably make it the best dressed of the raptors at Thompson Beach. 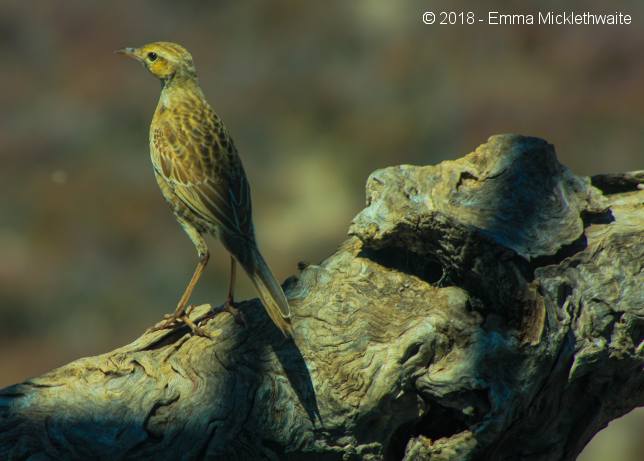 You may need to look very carefully to spot a pipit as they camouflage themselves well. If you do happen to spot one, you’ll often see it wagging its tail like a Willy Wagtail (the birds are related). 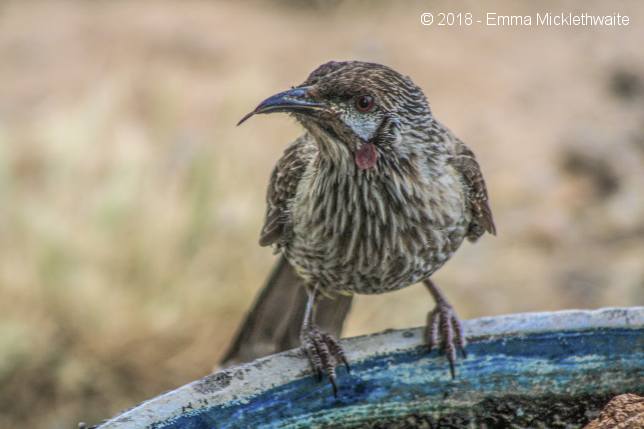 Known for their rather raucous call, the wattlebird is a large honeyeater, and is one of the largest nectarivorous birds in the world. 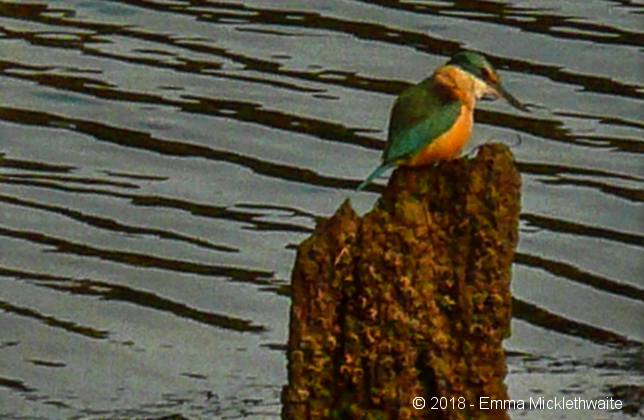 While it does hunt for fish, much of the Sacred Kingfisher’s diet consists of crustaceans, reptiles and insects. 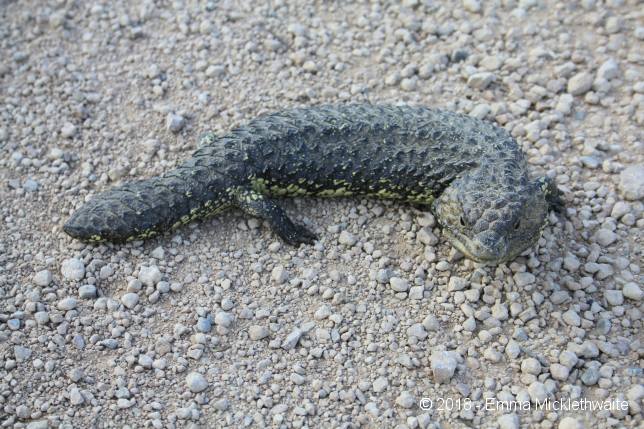 The Shingleback is also known as the Sleepy Lizard. This prehistoric looking creature is very docile and can live for up to 50 years! They also mate for life. 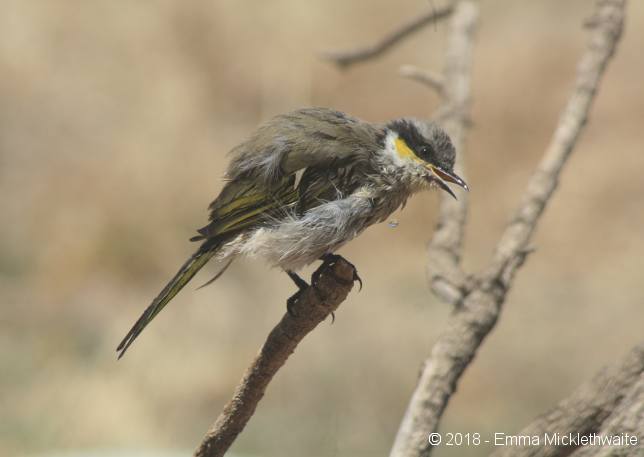 The Singing Honeyeater feeds on nectar, insects and fruit, quite close to the ground.This little fellow just had a bath, so he’s looking a bit ragged. 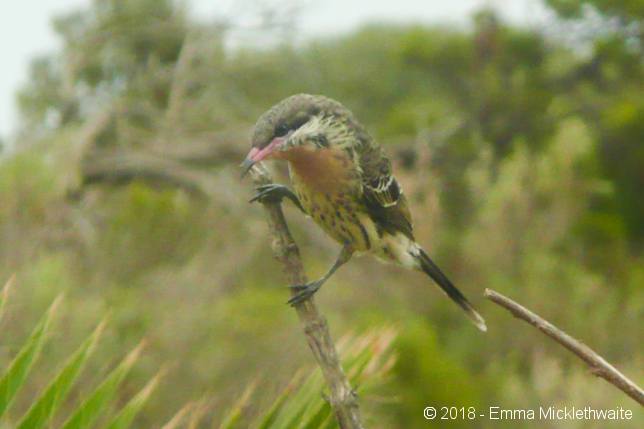 The Spiney-Cheeked Honeyeater’s diet consists predominantly of nectar and fruit, however it is also known to prey on eat insects, reptiles and even baby birds. 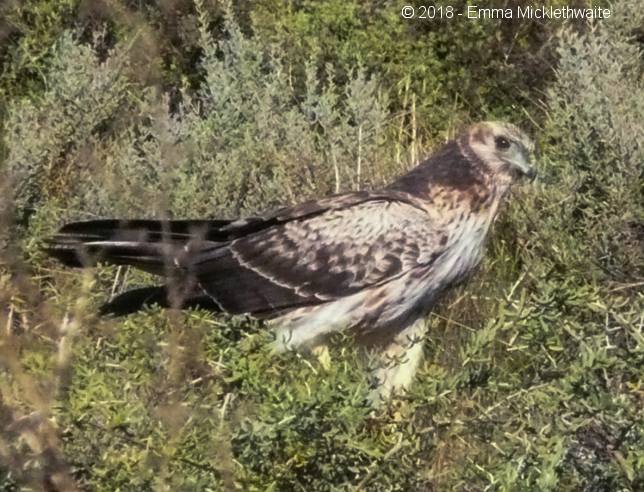 The Swamp Harrier is the largest of the raptors commonly seen at Thompson Beach and helps to keep the rabbits under control. 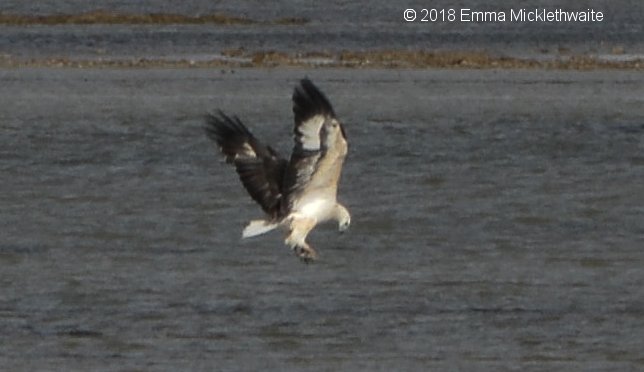 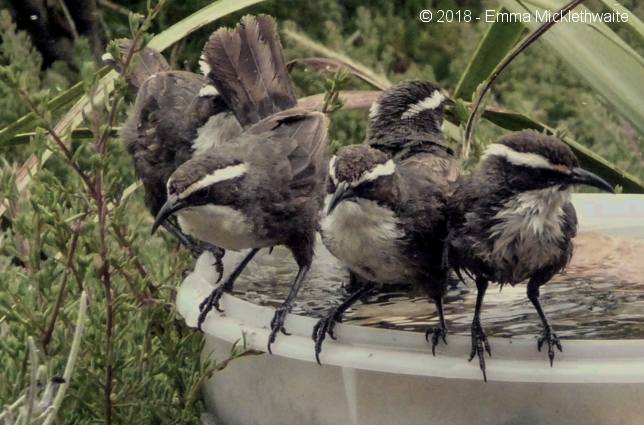 One of my favourites, Babblers are an energetic, highly social and rather cheeky bird. It’s great fun to watch their antics. The birds above seem to be enjoying their babblebath!

As well as the various native and migratory shorebird species, there are around 90 species of inland birds in the Thompson Beach area and many of types of reptiles; including various geckos and skinks.

Unfortunately, the Thompson Beach area has also been invaded by rabbits, feral cats, pigeons, starlings and foxes. Off-leash dogs can also cause problems, so if you bring yours, be sure that it’s kept on-leash and discourage it from disturbing local wildlife.

Of course, the other species that puts a lot of pressure on local native wildlife is Homo sapiens (us). Pick up some tips for caring for Thompson Beach.